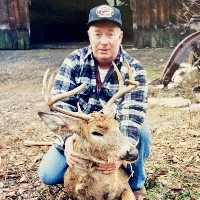 He was a machinist at Dupont, Chambersworks for 41 years. But in his spare time he’d head off to the woods, shotgun in hand. He started hunting at the age of 13. And since the 70’s he took a yearly trip to Irvona PA; every year he returned with a deer. At that camp they called him Cuz; the man who did the cooking. He made the best Hobo sandwich: Egg Bacon and cheese all melted together. And Sundays found Bill and his daughters watching the Three Stooges, eating the hobo sandwiched and enjoying the occasional Bloody Mary. He was the grillmaster of his home, always with a beer in hand. And he was known for his witty sayings, though they’re a little too racy to print. He was Honorary Chairman of the K of D men’s club. He followed his father into the membership.

The handsome guy with blue eyes was walking down the street when a pretty girl named Margo jumped out from behind the shrubs. The encounter lead to a 48-year marriage blessed by children, Jenny and Amy. He was the brother of Michael and cousin of Walter, Fred and Wayne Niebauer, Suzanne String and Deborah and Franklin McKown.. He was pre-deceased by his brother, Harry, his cousin, Kathleen Hawks and his special granddog, Pearl. Recent years brought a friendship with the crews from Stone House Revival and SDG Design and Construction as they restored his home. Family will celebrate 76 great years at a service after the pandemic.