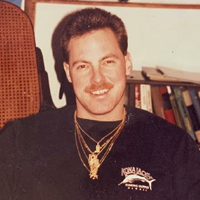 Like Nietzsche he thought that without music life would be a mistake.  Bill’s albums filled an entire room, but vinyl was a bond he shared with his daughter.  The obsession with Jazz and Funk probably dated back to his youth when he was a D.J.  Looking at his garden or lawn you never would have never guessed he grew up in the city.  His grass was the best in the neighborhood, his garden a mini farm providing a bounty of food.  Not even necessarily for him: Bill gave away abut 90 percent of his yield mainly just keeping his peppers.  If his T.V was on he’d be checking out some American Pickers.  Bill thought for sure there was some kind of multi million dollar find lurking in his home: either an obscure Van Gogh or some copy of the white album he hadn’t previously noticed.  And he was masterful in the kitchen, whipping up a little pasta or heading out to the grill to fire up some steaks.  He found solace in tinkering; if there was a project to be done you can be certain he’d finish it and that it would be perfect, even if he did complain a little in the beginning.

If his bond with his daughter was music, with his son it was dedication to work.  Of course, working at United Airlines for more than 35 years earned him more than a paycheck.  It’s there he’d meet a pretty girl named Kristen.  She was coming out of a relationship and was hesitant and first.  But if nothing else Bill was persistent; maybe it was that Polish stubborn thing.  Their marriage was blessed by two children: Chad Ryan Andracki and Alexandra Nicole Andracki.  As a parent he was low key but his kids knew his emotions: Bill led with his heart. He is survived by his brother, Richard (Terry) and a slew of friends and co-workers.

Come celebrate 56 great years Saturday 10-noon at Daley Life Celebration Studio, Swedesboro where there will be a noon service.