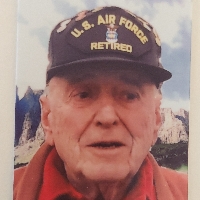 Age 17 found him talking his father into taking him down to the recruitment office and signing him up for the Air Force. Ray loved his 20 years of service to our nation and it shaped his entire being. He did everything with military precision from his use of the English language to installing screen doors. He provided for his family working all kinds of crazy hours with the Post Office. For relaxation he enjoyed the occasional beer from his favorite stein and watching his investments mature on the various cable stock programs. He saw the best in everybody, loved old war movies and was a member of the VFW post 10886. Ray was born in Brooklyn and lived in Burlington County before moving to Woolwich Twp.

He was stationed in Germany during his time with the Air Force. It’s there he’d meet a pretty girl named Rosa. They’d marry within six months. Six years later they were blessed with a son, Eric and later by a daughter Christiane and son-in-law, Brian Chervin.

Come celebrate 88 great years Wednesday from 10 to 11 a.m. at Daley Life Celebration Studio, 1518 Kings Highway, Swedesboro where there will be an 11 a.m. service.