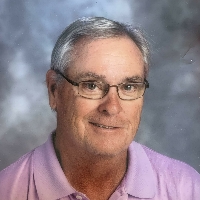 Pat was always working to get a laugh. He had claimed one of his best friends was a Monsignor, showed up with overalls and no shirt and tried to convince people he was some kind of hillbilly and if you were standing by a pool he might just go ahead and push you in. As an educator he was no different; he started off every day in the classroom with a joke to wake the kids up and start off the day in the right frame of mind. They couldn’t get enough of him- his room would be full of students during lunchtime, half enjoying eating with him, the other half getting a little needed tutoring. He spent 41 years at the Alice Costello School in Brooklawn teaching 8th grade science. And even in semi-retirement he kept educating, working at Millsboro Middle School, Delaware and even after that as a substitute. If he wasn’t spreading knowledge in the classroom he was most likely coaching and mentoring, especially basketball, but just about everywhere else where they needed a hand. But his love of sport dated to his youth; he was inducted into the hall of fame at Monsignor Bonner as the quarterback who won the Catholic League Championship, played in the Little League World Series, played minor league baseball for Pittsburgh and went to Temple on a baseball scholarship. He was an active member at Cripple Creek Golf Course. He loved being on the golf course especially with his friends. Even losing his leg couldn’t keep him from competing; he even played in a golf tournament in Las Vegas. And with competition in his blood he also spent multiple years owning and racing horses at Garden State Park, the Meadowlands, and Ocean Downs. His late son, Patrick, was his trainer and driver for a while and one of his horses ran at the Breeders Crown. Two horses once won in a day, though he credited that to a miraculous medal being held at the finish line by his mother. Most evenings and weekends in his younger years found him running his supermarket in Chester Heights, PA where he was also the butcher. He was a devout Catholic though he may have misbehaved from time to time while sitting in the pews.

In grammar school he met a pretty girl named Patricia. According to Patrick, she chased him until he ran out of sneakers and then he gave into her advances (others, including Patricia, disputed that narrative). In any case, they’d share an amazing 53-year marriage blessed by 4 children: Kelly Anne, Kimberly Anne (Mark Labbree), Kristie Anne, and the late Patrick Sean and later by grandchildren, Morgan, McKayla, Desirae and Roy.

A memorial will take place in Delaware at a later date.

Donations in lieu of flowers to St Jude’s Hospital (Stjude.org) or American Diabetes Foundation (diabetes.org) will be appreciated.