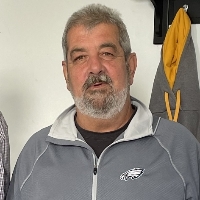 Johnny, the baby of the family, was raised to be a respectful, dedicated, and hardworking man. As a dad, he was a pushover, as long as you didn’t push too hard. He coached both of his kids passionately and didn’t think twice about driving hours to be on the sidelines to support the team. Coach John knew how to push the Kingsway Youth Football team; however, he was preparing them for more than just the Saturday game. To the outside eye, he was simply coaching a sport, but he taught them unforgettable morals and shaped them into the men they are today. Not only did Johnny coach football, but he also stepped up for the girl’s youth lacrosse team. Johnny didn’t know much about lacrosse, but when the team needed a coach, he decided to watch a few videos and learn the rules. He even coached his team to several winning seasons. He would tell the girls, “Joggy Joggy, you’re burning daylight.”

In his early years, he played football himself at Kingsway and was voted best looking- a fact that he frequently mentioned and would never let you forget. Johnny cultivated friendships that lasted a lifetime. The same buddies who joined him in his grammar school shenanigans, were by his side years later, as he took his position to be a prominent Woolwich resident. He worked in Concrete for most of his life at Azzari’s—where it was more about the art of perfecting the craft than just clocking in and out. Later in life, he would work at Good Fellows Concrete with his brother, Sam, still seeking that same perfection while deepening his love for the craft.

Johnny spent a lot of his free time in the beautiful home he and his wife built for their family. You would see him most “at home” when he was out in the woods, with a shotgun in hand, searching for the biggest buck. He was a fantastic skier in his younger years, on the off chance that you could beat him down the slopes, he would cover you in snow with that little grin planted on his face.

When he was settled in at home, the TV would always be glowing with his favorite shows on the screen. Whether it was The Sopranos, Yellowstone, or any of a dozen shows he’d watch, it gave him great comfort to sit back and relax in the living room. Everyone knew that Christmas was his holiday—he’d gather his whole family for his signature Prime Rib. John was always there to help his friends and family and was an active member of his community. He served on the Woolwich Township planning board and St. Alfio Committee for many years. Johnny wasn’t one for goodbyes. His favorite line was “So’long”- and he’d say it before he went off to some place, “to see a man about a horse”.

One day, he would meet a pretty girl at the Hilltop Restaurant, little did he know how much of an impact she would have on his life. Karen initially blew him off, but within weeks they were “friends until the end” as Johnny had engraved in their wedding rings. Everyone knew that where there was Johnny, there was Karen, always hand in hand. They would marry on a rainy mischief night and share a beautiful 28-year marriage. They were blessed with two incredible children, Nicholas and Sophia. He is survived by his sister, Lucy Ann Casella. He was predeceased by his parents, Salvatore Jr. and Angelina, as well as his brother, Sam. He is also survived by many nieces, nephews, and several God children.

Join us in celebrating 61 great years on Monday from 5-8 p.m. and Tuesday from 9-10:45 a.m. at St. Clare of Assisi Parish, St. Joseph’s Church, Swedesboro, where Mass of Christian Burial will be celebrated at 11 a.m. In lieu of flowers, donations to the family will be appreciated.