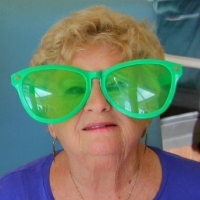 Elizabeth Mary Adams Pollis was born on February 23, 1935 to Francis and Violet Faunce Adams.
Elizabeth, also known as Betty, Bet, Mom-Mom, Betty Boop and Grandmom Boat, spent her early years in Philadelphia with her sisters Eleanor (predeceased) and Dolores Adams Burke of Cinnaminson, NJ. Elizabeth married the love of her life George Pollis Jr. on October 9, 1954. George, a talented vocalist and guitar player, entertained regularly in a popular band (The 4 Jacks). Betty could always be found by his side dancing and singing the night away. Additional hobbies included jitterbug/reggae dancing, bowling, traveling, church & neighborhood activities. Betty could also be heard cheering boisterously for her hometown Philadelphia Eagles and Phillies throughout the years.
The couple was blessed with four children: Karen Sindoni (Anthony, predeceased ) Dolores Turse (Albert), George Pollis and Michael Pollis (Paula). The family settled in Colwyn, PA and the neighborhood was never quite the same. Friends were quickly made and many parties & “ Good Times” rolled on Tribet Place!
Betty enjoyed many summers at the Colwyn Swim Club & involvement with the Colwyn Comet’s Sports Program, including her years as President of the Colwyn Comet’s Women’s Auxiliary. She was very involved & supportive with her children’s many activities.
The family summers were spent primarily at Lake Laurie campground in Cape May N.J which quickly became Betty’s “Happy Place!” The sights, sounds & activities of the quaint seaside town enveloped her throughout her life and she would frequently return there even after her move to Stuart, Florida.
With four children, a husband, dog named Bebe and a household to run, Betty eventually took on more employment and over the next decade she worked at Wanamaker’s Crystal Tea Room, delighting customers with her vibrant personality. She then went on to be employed in different aspects of real estate & property management companies
After George’s passing in 1986, Betty continued her property management career and continued to be involved with her children and growing number of grandchildren. In 1994 her sons George and Michael moved to Florida, and shortly thereafter Betty followed. To her delight she acquired a beautiful condominium in the very active community of Pierpoint in Stuart, FL. Over the next 25 plus years Betty was a force to be reckoned with. She took on numerous roles in her local church of St Joseph’s Parish including the Columbiettes, Bingo and various community services for those in need. Pierpoint was filled with her vibrance and zest for life as she was never far from horse racing night, potluck picnics, the Strawberry festival, card games and the Holiday Shows where she starred in many lead roles (Rudolf, Alvin the Chipmunk, Christmas Angel.)
Her family continued to grow with a total of 11 grandchildren and 8 great grandchildren, Betty would summer back in her beloved Cape May along with additional trips across the globe including a memorable trip to Poland with her sister Dolores.
There were some quiet moments which might include listening to her “boyfriend” Johnny Mathis or viewing another episode of Murder She Wrote & Columbo. Betty loved watching the waves roll in at Stuart Beach, but even more so enjoyed riding those waves boating with her sons & their families. She delighted in the delicacies of many local restaurants with friends & of course, if live music was involved, Betty was there! Living in an island environment her love of Jimmy Buffet & Reggae quickly became favorite additions to the big band sound she grew up with and the songs performed by her husband’s band. She loved following her son George’s Reggae Band “ The Reel Ting.”Her favorite song embodied her life’s mantra “Don’t Worry, Be Happy”.
As her health declined, she recently moved back to the northeast and settled with her daughters in Swedesboro, NJ. Her last few months were filled with fabulous hairstyles by her daughter Karen, theater, shopping, pedicures, holiday festivities, church services and of course, her trips to Cape May. She passed into His eternal glory, surrounded by family on January 5th 2023.
A life well lived and an eternal life with our Lord, Elizabeth Mary Adams Pollis is survived not only by her children, but also her 10 grandchildren (Sarah, Troy, Bethany, Laura, Alaina, Lindsey, Austin, Griffin, Siena, Georgie.) She is preceded in death by her Beloved Grandson Jason. She is also survived by her 8 great grandchildren (Owen, Ella, Benny, Quinn, Cameron, Nathan, Beau and Teddy) many loving nieces, nephews, & her Beloved Grand Dog Tucker.
She will live on through her well-known songs, jingles and phrases that we pass on to our children and theirs, like “round ball” (most of which are too inappropriate to put into writing, but feel free to ask anyone from the family). Elizabeth Mary Adams Pollis would be the first to tell you “Don’t miss a moment” and “I love you Fifty Million Skillion.” “See you later alligator, in a while crocodile!”

Come celebrate 87 great years Friday January 20th, 9:30 to 10:45 a.m. at St. Mary’s Church, 426 Monmouth Street, Gloucester City where mass will be celebrated at 11:00 a.m. Vibrant flowers are welcome in celebration of this vibrant lady but also donations to St. Jude’s Hospital (Stjude.org) will be appreciated.