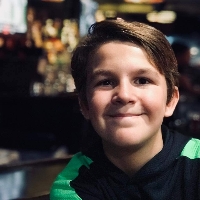 He may have only been 13, but Jackson was sophisticated well beyond his years. Six feet tall and a gentle soul. He was intuitive about people’s emotions; those in a bad place would get his support. He knew how to listen, and you knew you were being heard. He was the anti-teen. Jackson had forged his own way: he hated rap and loved Imagine Dragons, despised Nike, and preferred American Eagle Outfitters; Chess over sports; independent achievement over teamwork; The Office over Sponge Bob. He collected historical artifacts and could find joy in an old oil painting that most would just discard. It was a bad idea to challenge him at the game “Do you know?”; Jackson’s head was full of sundry odd facts. His prize possessions were his gaming computer and his SE bike. He was patient and played the long game: down the shore he would head to the boardwalk casino, spend a whole summer gathering tickets to win the biggest prize. His only exception to his adversity to teamwork was his closest friend and partner in crime, his sister, Riley. They did everything together down to doing the dishes: one would clean up, the other would pack up. He loved horror films for the adrenaline rush and cooked Asian food; Jackson was PF Chang but with custom sauces. He aspired to be a food scientist in his bid to cure Type I diabetes.
Jackson is survived by his parents, John and Janine, his sister Riley, and grandparents, Frances Fries (the late John), and Joe and Dawn Sadlowski; and many aunts and uncles, cousins and friends.
Come celebrate 13 great years Thursday 6-8 p.m. at Evoy-Banasz Funeral Home, 129 White Horse Pike, Haddon Heights NJ. Mass of Christian Burial will be celebrated Friday 11 a.m.at Church of St. Joan of Arc, 100 Willow Bend Road, Marlton NJ. Livestream at https://boxcast.tv/view/in-celebration-of-the-life-of-jackson-sadlowski-832125