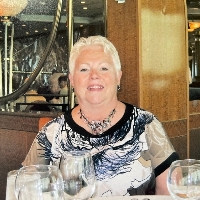 If you saw her tooling down the road, you’d know her first priority: Theresa’s license plate read “GRANNY5.” So much more than the average grandmother; her grandchildren thought of her more as a best friend. Of course, she would “go granny” all over you if you tripped her temper, and she was always there with the unvarnished truth: Theresa didn’t have much of a filter. You couldn’t keep the girl from shopping. Of course, it was never anything extravagant; she was a fan of the blue light special. Rumor was that she kept K-Mart in business. She made the heartiest of meals though they may have not been the healthiest, they were always the tastiest.. She was a woman in constant motion and always up for an adventure. She drove cross country with her son in the family station wagon, visited Alaska and the Caribbean, and got her first tattoo at 75. Quieter times found her doing stained glass and painting at All Fired Up. Theresa kept her best friends for a lifetime, especially Loretta and Lori. If her T.V. was on she’d probably be checking out some sci-fi: a Star Wars fanatic.
She is survived by her only son, Michael; and she was “Granny” to Lyn, Casey, Kelly, Rachel and Erin; and “Gigi” to Knox, London and Hadlee. Also survived by her sisters Kathy (John) Pabst and Sheila (Alan) McIlvaine. She was pre-deceased by Joseph, her husband of 50 years. Her beloved brother, Frank. Sister-in-law Delores and Daughter-in-law Toni. She is also survived by much extended family and many friends .
Burial is private, luncheon to be announced…