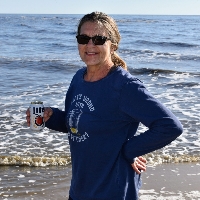 Come tough times, everyone relied on Carol’s strength. She was ornery, but always the fun flavor of ornery: smirk on her face and a half a can of Miller Lite in front of her. The consummate prankster. No one ever had more fun at a wedding: Carol loved disco but she’d dance a style all her own, knock a few people over to catch the bouquet and make her patented monkey calls from time to time. If she thought it was getting boring she’d put a couple of balloons under her shirt and get the party going again. In her early years she dreamt of being a veterinarian. Not a shock that her Mullica Hill home was a home to 7 turtles, 2 pheasants, a goose, three dogs, 2 goats and a bevy of other creatures she happened upon. And they were all spoiled: her rabbits had several condos and her goats had a heater and jackets. She was a pickup truck kind of girl who’d rather push a Toyota than drive a Ford. Her favorite place was the beach for a little peace and solitude. Fishing, of course, was in her D.N.A; she had inherited the trait from her father. And when she drove her truck on the beach, she’d spend much of her time hauling out the other trucks that didn’t know what they were doing. In Cape May she’d wander the sand bars looking for fun creatures to entertain her. Crab get-togethers were her thing: a few solid hours of cracking shells. She had no fear of snakes, won more than her fair share of arm-wrestling matches (she was buff in earlier years) and could dock her boat without breaking a sweat.  And she felt naked without her white Haines T-shirt. If her T.V was on she’d be checking out the Hallmark Channel. Carol cheered harder than anyone for the Eagles and she was fixated from kickoff to the last snap; best not text her when the game was on. Carol worked as a research scientist for AstraZeneca, graduated from Paulsboro High School and was originally from Gibbstown. She met a pretty girl named Ranae Pollicino in high school; they’d spend 42 years as life partners. She is survived by her sister Ronda Bast (Thomas) and her nephews, Andrew and Joshua Hurst.Come celebrate 62 great years Saturday September 17 noon-2 p.m. at Daley Life Celebration Studio, Swedesboro where you can tell a great story about her at the 2 p.m. storytime service. After the service, Ranae and Ronda are inviting everyone back for an outdoor celebration 3-7 at Carol’s home.