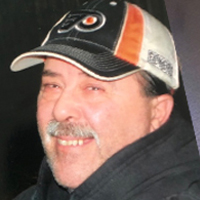 “Where’s the coffee?“ “Let’s Go Flyers!!!!!” Most knew him simply as Dego. Florida family knew him as Snookie. In the dead of winter when the fire alarm sounded, for 47 years he leapt from his bed to fight fires and save lives. He spent as much time at the Woolwich firehouse as in his home. Some say more. He always had a thing for technology: in the 70’s he had a Ham radio that took up half the living room. His handle, of course, was Dego. With it he made friends all over the world. When he got out of town he’d be off to the wilderness with his wife: they camped all over the area, even on their honeymoon. He was a regular in the stands at Bridgeport Speedway since 1973 and loved to head out on the open highway on his Honda. Born in Philly and raised in Swedesboro, Dego was a 1970 graduate of Kingsway. He was the world’s biggest Flyers Fan worked at Frank’s Motor Parts for 30 years.
Dego was driving through Gibbstown in his grey Corvair convertible and made a hasty U-turn when he saw the pretty Judy Yarborough stepping off a bus. They’d marry within the year. Their 48 year marriage was blessed by 3 children: Annette Lieggi, Anthony and Michael (Deanna); 6 grandchildren: Brandon, Brittney, Dominique, Brianna, Giana and Delia. He is survived by siblings, Angel Foster (Steve), Nelda Amatuzzi and Jessie Atkinson (Dave) and was a great host to his nieces and nephews.
Come celebrate 68 great years Saturday October 5, from 10 a.m. till noon at Daley Life Celebration Studio, Swedesboro where there will be a noon service officiated by the Woolwich Fire Company.